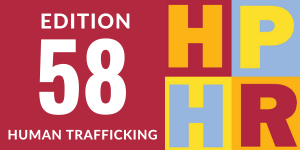 The American Fire Service occupies real estate at a critical juncture of public health, public security, and public trust. All available data indicates California has a significant human trafficking problem; while human trafficking poses as a dynamic transient crime, often serving as an intersectional criminal tactic, California’s law enforcement and emergency response systems and resources are not being leveraged to match the threat. The Alameda County Fire Department’s role as community based first responders provides them unique access to environments which would be otherwise inaccessible to law enforcement. Fire/EMS personnel enjoy a level of trust law enforcement does not and have not been fully integrated into California’s anti-trafficking response. If not properly trained to identify human trafficking related suspicious behavior, victims or perpetrators may go unidentified.

Human trafficking is best described as the despicable exploitation of others for profit through the use of force, fraud, or coercion. This pernicious act decimates the lives of the trafficked, fracturing families, and exploits the victim’s body and labor as a renewable resource. Traffickers rely upon anonymity, seeking out vulnerable populations, commonly using techniques of physical and psychological abuse – utilizing fear and intimidation to exert control over their victims. Some traffickers keep their victims under lock and key, while others use less obvious methods, specifically debt bondage – asserting erroneous financial obligations wherein the victim feels honor-bound to satisfy dubious debt. Trafficking has been described as akin to slavery and persists in all areas of the world with a significant presence in California. Tied with illegal arms sales, human trafficking is commonly seen as the second largest global criminal industry and as the fastest growing criminal activity in the 21st century. The International Labour Organization estimates human trafficking generates approximately $150 billion a year globally.1

While California enjoys being one of the most populous states with one of the largest economies, exploitative criminal elements view California as a valuable marketplace in which to traffic, sell, and exploit their human products.2,3 While many believe human trafficking occurs only in foreign countries or to foreign nationals, 72% of all trafficking victims in California were US citizens. 4,5 California initiates the most tips reported to the National Human Trafficking Hotline. In 2019, Californians originated 1,507 tips – almost equaling the 2nd and 3rd place states combined.6 Texas was second with 1,080, then Florida with 896 calls (totaling 1,976).7,8 California also leads the nation with the greatest number of local Human Trafficking Task Forces/Community Collaboratives with approximately 32. California applies the most robust and knowledgeable anti-trafficking law enforcement and victim service response in the world; however, Fire and Emergency Medical Services (EMS) remain undertrained and underutilized to identify and report suspected trafficking activity.9

Initial efforts were focused on identifying existing qualitative studies, case studies, analyzing common and best-practice anti-trafficking response emergency medical services are likely to deploy when interacting with vulnerable populations. While this field of research is in its infancy, with limited scholarship, there are a few seminal studies that illuminate a dearth of overall Fire/EMS anti-trafficking education and the strong likelihood of victim interaction.

Assessments of basic awareness and anecdotal evidence indicates the Alameda County Fire District (ACFD) has an anti-trafficking education and response gap. Enhancing Fire/EMS’ understanding of the criminology of the perpetrators, the anticipated disaster response structure and the proposed methods to mitigate future exploitation is likely to assist in the identification and support of trafficking survivors. Upon examination of qualitative review of evidence, formal study is needed to develop specialized training for Fire/EMS responders in the community.10

The American Fire Service occupies real estate at a critical juncture of public health and homeland security.11 The ACFD’s role as community based first responders provides them unique access to environments which would be otherwise inaccessible to law enforcement or social services. Fire/EMS personnel enjoy a level of trust law enforcement generally does not. The public commonly sees fire and EMS as “helpers” and not “incarcerators.” This social equity allows them interpersonal contact and information disclosure police and federal agencies rarely have access to.12 As mandated reporters, firefighters are obliged to report the abuse/neglect of children to Child Protective Services or of adults to Adult Protective Services, as well as report suspected domestic violence to law enforcement. 13Suspected human trafficking as a category is not included. Keeping in line with their obligation to protect vulnerable populations, first responders should be knowledgeable on ancillary predatory behavior they are likely to encounter including commercial sexual exploitation and forced/exploited labor trafficking. 14 Throughout this literature and research review, studies indicate victims of trafficking have accessed healthcare provider care in 88% of the time while being trafficked. 15In a 2018 study, less than half of EMS providers have had basic anti-trafficking training.16

The County of Alameda is geographically and economically at an epicenter of trade, tourism and commerce. With ports of entry by land, sea, and air, Alameda is targeted by traffickers to move, shelter, and exploit people covertly. As the most populous state in the nation, California also has a significant number vulnerable populations such as homeless, runaway, and people suffering from mental illness. The ACFD is exceptionally positioned to interact and support many of these vulnerable populations. As our knowledge and awareness of human trafficking expands, policy makers must seek new and creative methods of utilizing our resources to identify potential victims of trafficking, dismantle trafficking networks and innovative ways to separate victims from their exploitation. 17Expanding and refining our identification and reporting protocols for emergency medical and fire personnel would decrease the shadow traffickers require to operate.18

A majority of the existing human trafficking intervention training is focused on law enforcement and social service agencies. Training ACFD first responders in the prevalence and dangers of human trafficking is absent. Beginning in 2020, the San Diego “District Attorney’s Office partnered with the San Diego County Fire Chiefs Association, the San Miguel, Rincon and San Diego fire departments and American Medical Response to provide the specialized training” to an estimated 3,000 first responders.19 Due to ACFD’s emergency medical responses, interaction with the homeless population, and unscripted interactions with the public during emergency incidents, responders should be given the skills to recognize the potential signs and indicators of trafficking and know how to safely and appropriately report their suspicions. The County of Alameda, State of California, and the Department of Homeland Security have extensive resources available to public safety agencies.

Fire and emergency services sit at the intersection of both public health/safety and homeland security/defense. As sensors in the community, working 24-hours a day, first responders from the ACFD are exposed to immense information and may encounter suspected human trafficking victims. Within California, very few fire agencies have engaged in anti-trafficking efforts. Alameda County Fire is strategically located in a highly populated, diverse location that has significant sexual exploitation and labor trafficking challenges and should have an established protocol on how to respond to these events when encountered.

Enhanced Partnership with Local Law Enforcement: At this time, there is no stated practice or specialized training for ACFD to respond to suspected trafficking. In keeping with ACFD’s other legal obligations, suspicious behavior should be reported to appropriate local partners.

Resources for training will be made available to ACFD operations personnel via multi-disciplinary task force trainings, provided in cooperation the ACFD Training Division. H.E.A.T offers free training resources addressing recognition, identification, and reporting instances of human trafficking.21 In the interest of fiscal impact, the initial presentation of this information can be provided in the form of video courses provided on the Target Solutions virtual training platform.

Implement ACFD specific human trafficking response protocol in cooperation with local law enforcement Special Victims Unit practices. In cooperation with Alameda County Sheriff’s Office, the Office of the District Attorney of Alameda County and the Office of the Attorney General, ACFD shall adopt a protocol/procedure for reporting suspected trafficking to the appropriate authorities, while maintaining privacy rights, addressing all Health Insurance Portability and Accountability Act of 1996 (HIPPA) concerns, abiding by applicable State and Federal law.22

Recommendation for creation of a Human Trafficking Liaison Officer (HTLO) within ACFD to provide guidance and direct action on suspicious activity. In keeping with the model created in response to the attacks of September 11th, the terrorism liaison officer (TLO) is an individual who has completed a baseline basic awareness course and serves as a point of contact for a public safety agency in matters related to terrorism information and intelligence.23 The HTLO position is consistent with ACFD’s practice utilizing the Division Chief of EMS as primary contact for infection control, abuse cases, or other unusual occurrences. By creating an internal single point of contact, the ACFD can efficiently communicate, coordinate and collaborate with its community and state partners. In coordination with the California Governor’s Office of Emergency Services (CalOES), ACFD may have access to grant funding to further the goals of preventing and mitigating the exploitation of human beings.24

Criminal law and victim support is a reflection of a society’s values and morals. Individuals who engage in the exploitation of others have chosen to live outside of societal morals. Anti-trafficking goals should include seeking new and innovative ways to leverage existing resources to slow the trafficking enterprise, with the ultimate goal of crippling it. California likely has the most significant human trafficking problem in the United States. The ACFD is a premiere all-risk emergency response agency, and the current knowledge gap provides the Department an opportunity to demonstrate its dedication to public safety and community support.25

Benjamin Thomas Greer, J.D., M.A. is an Emergency Management Instructor, California Governor’s Office of Emergency Services (CalOES) Mr. Greer’s role at the California Governor’s Office of Emergency Services is as a subject matter expert in the field of human trafficking and child sexual exploitation; specifically instructing and developing human trafficking courses for law enforcement and emergency management personnel. Before joining Cal OES, he served as a Special Deputy Attorney General for the California Department of Justice – Office of the Attorney General. He led a team of attorneys and non-attorneys in a comprehensive report for the California Attorney General entitled, “The State of Human Trafficking in California 2012” and published extensively on various aspects of trafficking. Aside from his work with CalOES, he recently graduated from the Naval Postgraduate School’s Center for Homeland Defense and Security Master’s Degree Program and is a Research Associate for the University of Cambridge’s Centre for Applied Research in Human Trafficking (CCARHT).

Chief Heather Marques, M.A. is an Division Chief of Medical Services for an all-risk fire department in the East Bay of the San Francisco Bay Area. Her agency’s district covers over 500 square miles and provides fire suppression, ALS emergency medical services, fire prevention, and public education. Heather is trained as a Nationally Registered Paramedic, a hazmat specialist, a confined space rescue technician, water rescue specialist, and teaches at the fire academy. She also teaches paramedic level courses and is a certified instructor and lead skills evaluator for the California State Fire Marshal. She serves on the California State Fire Association (CSFA) Leadership, Equity, Diversity and Service committee. Heather holds an associate degree in photography, an associate degree in paramedicine, and a bachelor’s degree in anthropology from the University of California at Berkeley. Heather has attended the Los Angeles Fire Department Leadership Academy. She recently graduates the master’s program in Security Studies at the Naval Postgraduate School in Monterey, California. Her thesis is about the challenges faced by female firefighters. Her thesis is titled Working Fire: Recruitment, Retention, and Retirement of Women Firefighters.