Why the health of the incarcerated people in US matters

The United States of America is often called the land of free and home of the brave. Yet, nearly 2.2 million adults are locked in prisons and jails across the United States as of 2016. If the number of people in prisons was a state, it would have ranked 36th in population ahead of Nebraska and 13 other states. It cost the U.S. taxpayers $87 billion in 2015 for the same amount of public safety in 1978 for $5.5 billion. Mass incarceration costs American people $182 billion each year. 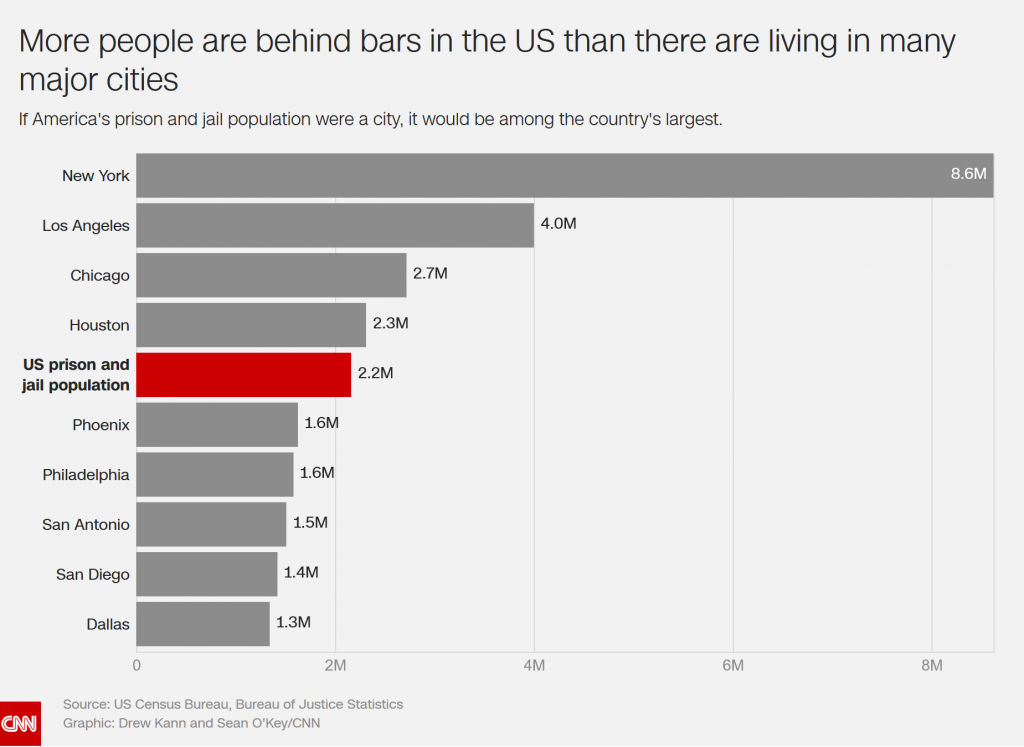 Every year, $80 billion is spent on correction facilities alone, compared to the $68 billion budget on the education department. Yet, prisoners in U.S. jails are excessively prone to have frequent health problems, including diabetes, high blood pressure, HIV, and mental health problems. 40% of all imprisoned people in the U.S. have a chronic disease, many of which are diagnosed for the first time in prisons. These prisoners account for 35% of the nation’s total cases of hepatitis C. Mass incarceration has also shortened U.S. life expectancy has been by five years.

Coronavirus infected imprisoned people at a rate of more than five times the national average, which was not a surprise since social distancing is not possible in prisons as they are overcrowded. Black women and men account for 21% of the people detained only once and 28% of the time arrested multiple times even though they make up only 13% of the general population in the U.S.  Residential segregation and racial profiling increase the probability of police arresting black people. Prisoners are more likely to be at high risk for AIDS. For example, 25% of Americans living with an HIV infection were incarcerated during 2008, and 42% of all newly reported HIV infections were black men. In addition, 50% of the people with multiple arrests had incomes below US$10,000 per year which shows poverty is a crucial determinant with the number of times a person is arrested.

More than half of all Americans in prison or jail have a mental illness. The Treatment Advocacy Center estimates it is 2.5 times quicker for law enforcement to transport someone to jail than a medical facility. People in prisons are five times more likely than the general population to have a severe mental illness, and two-thirds have a substance use disorder. In 2017, the Massachusetts Department of Public Health found “the opioid overdose death rate is 120 times higher for those recently released from incarceration than the rest of the adult population”. Even though proven treatment methods of opioids are available generously, they are not available to people and recently released from prison. Three-quarters of people in state and federal prisons are overweight or obese. In addition, the American Diabetes Association has estimated that healthcare costs are 2.3 times higher for incarcerated people with diabetes.

Suicide is the leading cause of death in jails, far higher than that of the American population in general, accounting for almost 30% of deaths, with research finding that 26% of jail suicides occurred within just three days. In many states, prisoners must pay co-pays to visit a physician for health services to deter unnecessary doctor visits. Unfortunately, they also prevent sick people from getting the care they need. US$2-10 co-pay may not seem costly but incarcerated people typically earn only 14 to 63 cents per hour, which makes it expensive in relative terms.

Policymakers are increasingly using police to solve medical and economic challenges unrelated to public safety issues, resulting in prisons being crammed with individuals who need medical and social services. Most of these people are low-income, less educated, unemployed, and belong to minority groups. Rather than incarnating these people, we need to increase investment in employment assistance, vocational training, education that would help these people.

We need to focus on the community as underfunded schools and areas with high unemployment rates breeds crime. People living in these places do not see a better future for themselves or their loved ones. Investment in social and public services needs to increase nationally. Too many adults need love, support, and treated mercifully instead of being sent to prison. In 2016, about 65% of all the prisoners in local jails were not convicted. People arrested can get out promptly by posting bail, but individuals who cannot pay for bail are trapped in the system and continue to spend time in jail until the courts do not intervene. Kids who grew up in families of the bottom ten percent of income are 20 times more likely to be in prison than kids born in the top percent. This system puts marginalized individuals at a considerable disadvantage. This type of system weakens the fabric of the community. Prisoners need healthcare; when Medicaid has expanded, both violent and property crime rates fall as it increases access to mental health care needs and reduces financial instability. Increasing access to mental health treatment reduces violent as well as financially-motivated crime. Investing in such care is estimated to yield a $12 return for every $1 spent, as it decreases crime and lowers health care costs.

Individuals that are repeatedly arrested for lower-level offenses have mental health needs and are economically marginalized. Arresting these individuals neither improves public safety nor addresses their underlying needs. We need to redirect dollars wasted on repeatedly jailing people toward public services like education, employment assistance, public health, medical and mental health services.