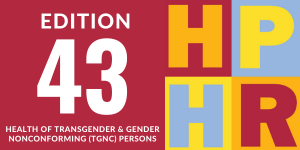 Healthcare Limitations for Transgender and Non-conforming (TGNC) Persons in Pakistan

Healthcare Limitations for Transgender and Non-conforming (TGNC) Persons in Pakistan

Pakistan finds itself at a crossroads, struggling between legitimizing the identity of trans gender and non-conforming (TGNC) persons and the multivariate forces that hold back this progression. This can be observed when one seeks out census data on the khawajasira population – a respectful Urdu term for TGNC persons.1 Officially this number stands at 10,422,2 but various organizations advocating for TGNC rights state this number to be around 300,000 to 500,000.3 So while progressive changes, such as the Transgender Person (Protection of Rights) Act of 2018,4 have led to Pakistan recognizing khawajasira as a third gender, they are grossly underreported on the national census. This gives us an insight into the problems faced when it comes to their recognition into Pakistani society, often stemming from the stigma of their own social networks. This stigma illustrates the intersectional nexus of discrimination reflected in religion and politics, resulting in disapproval, marginalization, and social banishment.5 Religion is instrumentalized by predominantly religious and other non-state actors who condemn khawajsira identity and culture, which further propagates the status quo.6 As a result, much of Pakistan’s TGNC populations live on the margins of society, with an overwhelming majority experiencing institutionalized discrimination and physical attacks.5 The odds of subsequent engagement in high-risk behaviors such as survival sex, drug use, and even suicide increase dramatically.5 Due to this marginalization, TGNC persons defer their healthcare needs until absolutely necessary thus undermining their outcomes from illnesses that are otherwise preventable.7 Specific reasons include prejudice by healthcare professionals, inexperience with TGNC healthcare, and the lack of legislation protecting TGNC rights.

Accompanied with their low socioeconomic status often resulting from generational and ongoing discrimination, many khawajasira  seek refuge in compounds (hijra dera) that are usually congested and unkempt.8 Oftentimes this living arrangement is complicated by communicable diseases and sexually transmitted infections among other commonly curable or treatable health conditions.9 STI incidence has increased in recent years, resulting in a 20% prevalence of STIs among trans persons in cities across Pakistan.10 HIV prevalence is disproportionately higher among trans gender persons at 7.1% as compared to less than 0.1% prevalence in the general Pakistani population.11 Social stigma has resulted in healthcare professionals sometimes refusing to treat TGNC persons even in life or death circumstances,  undermining health outcomes for this population.12

About 70% of the TGNC populations in Pakistan believe they receive poor quality of health care services.13 A factor that plays into this is inexperience and lack of knowledge among healthcare professionals in treating these populations. Research conducted by Aga Khan University in Pakistan found that most medical students had little knowledge about trans identities (n = 152; 61.0%).14 Most of these students, however, did understand that the TGNC populations in Pakistan lack access to healthcare and are treated differently in the clinical setting. Barriers in receiving medical and healthcare provisions for TGNC persons may include non-acceptance, feeling ashamed, non-availability of the appropriate identification, and non-affordability which impact their desire and ability to access appropriate care.13 With more research, the level of knowledge and biases of the medical workforce can be assessed in Pakistan. These studies can help validate and propose potential solutions to address the identified gaps in education and provide adequate medical training with regards to TGNC healthcare.

While in the past Pakistan had no specific law for TGNC healthcare, a Senate committee had recently approved a bill for full legal protection to TGNC persons in December of 2017. The bill provides protection of the rights for TGNC persons and their welfare and other related matters, including healthcare. Furthermore, the National Assembly of Pakistan approved the bill into an act called the Transgender Person (Protection of Rights) Act of 2018. On top of giving TGNC persons the right to be recognized as per one’s gender identity or gender expression, it outlines inheritance laws, prohibits discrimination, and requires the government to institute protection centers and provide adequate medical facilities.4 Adding to this, a federal scheme named the Sehat Sahulat program was launched in December of 2019 that makes TGNC persons eligible for government health insurance as it does not discriminate between sex, gender, and sexual orientation.15

Although these acts have been monumental for the TGNC community, it is not clear how well the government has been adhering to these new laws, especially because of the contradictions between the acts and previous Pakistani laws. One part of the 2018 act that may come into scrutiny relates to marriage and intercourse in Pakistan, where engaging in homosexual activities is criminalized according to a colonial-origin penal code.16 Now that self-declaring one’s gender is fully protected in Pakistan, hypothetically one member of a same-sex couple can officially arrange a change of gender for themselves and have a legal, “heterosexual” marriage officiated. Similarly, deficits exist in the rollout of the Sehat Sahulat program for the TGNC populations, as only 5626 people have registered over the span of 2 years highlighting the need for awareness by the government.17 This sheds light at how there is much that remains to be addressed by these legislations regarding TGNC rights.

Healthcare remains as one of the major barriers for TGNC persons in being treated with equal rights, along with the other severe disparities that they face in Pakistan. Prejudice, ignorance, and poor legislation are still present at large in the country and prevents TGNC persons from many of the rights they deserve as Pakistani citizens. Adding TGNC-health to medical school curriculums, as well as educating current healthcare professionals, may alleviate some of the inequality by producing doctors and nurses that can cater to all individuals regardless of identification.14 Even though the Pakistani government has made steps in trying to remove the social stigma that has been held for generations, there is still work needed to be done to have a fair and just system for all individuals. The problem is a systematic one, thus the solution lies in addressing attitudes at every level of governance and within the general population.

Ahmed Raza Khan is a medical student at Dow university of health sciences in Karachi Pakistan. He has been closely studying the inner workings of the medical system in Pakistan and providing services whenever necessary to the marginalized communities and underfunded health institutions in the country.

Khurram Hussain is a medical student at Dow University in Karachi, Pakistan. Outside of school, he is involved with serving the underprivileged community in the city.

Annas Ghafoor is a medical student at Dow University in Karachi Pakistan. He is involved with problems surrounding access to healthcare for marginalized and discriminated populations in the country and addressing the stigma around mental health.