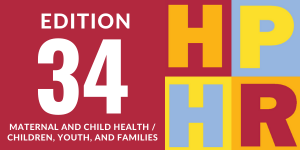 Making Up for Lost Time: Advancing Global Adolescent Sexual and Reproductive Health Equity Through COVID and Beyond

Phillips S. Making up for lost time: advancing global adolescent sexual and reproductive health equity through COVID-19 and beyond. HPHR. 2021;34.

Making Up for Lost Time: Advancing Global Adolescent Sexual and Reproductive Health Equity Through COVID and Beyond

Adolescence, defined by the WHO as 10-19 years of age, is a dynamic period of human development marked by physiologic changes and behavioral patterning that sets the foundation for adult life.1 As a group, adolescents presently comprise approximately 16% of the world’s population, an estimated 1.2 billion individuals.2 Health behaviors cultivated in adolescence can have far reaching consequences not limited to individual personal health, but extending to economic and social wellbeing as well.3 For example, adolescents who develop preventable comorbidities or adverse health behaviors may suffer poorer educational and/or employment opportunities in the future, affecting their larger communities and society as a whole.

Given that adolescents are at a life stage beginning to explore their sexuality, the field of adolescent sexual and reproductive health (ASRH) is of particular significance. Despite the renewed commitment to ASRH through the 1994 International Conference of Population and Development (ICPD) and the subsequent Millennium Development Goals, notable gaps persist4-5 and are predicted to widen during the COVID-19 pandemic.6-7 With a lack of appropriate ASRH information and services, youth may be unable to make well-formed decisions, increasing the risk for long-term sexual and reproductive morbidity and mortality. Those consistently at highest risk of adverse outcomes are adolescent girls from marginalized communities in low to middle income countries (LMIC).1,5 Investing to promote the health of this population is of utmost importance.

This memo will summarize the critical sexual and reproductive health (SRH) needs of adolescent girls in LMIC and illustrate the consequences of inaction on the part of policymakers, public health officials, and nongovernmental organizations. Aiming to serve as a call to action, the following comments provide a sweeping overview of the state of ASRH for this population before and during the initial stages of the COVID-19 pandemic while providing targeted areas for intervention. The pandemic has provided us an opportunity to confront longstanding health inequities and disparities in ASRH– we must not squander it.

Signed by 179 countries, the 1994 ICPD Programme of Action applied a human rights lens to global SRH, especially advocating for the role of women and girls in making individualized decisions to exercise the fullest extent of their reproductive lives.8 Since the 1994 ICPD solidified the importance of ASRH, global health metrics have generally improved, but more work remains. The 1994 ICPD defines reproductive health as “a state of complete physical, mental and social well-being and not merely the absence of disease or infirmity, in all matters relating to the reproductive system and to its functions and processes”.8 Trends since 1994 show that youth are progressively delaying marriage and initiating sexual activity pre-maritally,9 creating a situation where youth are having more sexual partners for a longer period of time as compared to previous generations. Globally, adolescent girls have delayed initiation of sexual activity (with the notable exception of Latin America) and rates of marriage under the age of 18 years continue to decrease9, though the burden remains high at ~12 million girls married in childhood annually (predominantly in sub-Saharan Africa and South Asia).10

Adolescent girls, particularly in LMIC, face stark challenges in ownership of their sexual and reproductive health, evidenced by high rates of unmet needs for contraception and family planning. A scoping literature review from the International Center for Research on Women (ICRW) showed that large numbers of adolescent girls in LMIC want to avoid and/or delay pregnancy yet lack access to and knowledge of safe, modern and affordable methods to do so.11 Though somewhat dated, a composite by the United Nations Population Fund (UNFPA) revealed that in 2015, 13 million adolescents had unmet needs for modern contraception, with the largest concentration living in the Asian/Pacific region followed by sub-Saharan Africa.12 Unmet contraceptive needs have direct consequences on the adolescent pregnancy burden in LMIC. It is estimated that over 12.7 million adolescent girls in LMIC give birth annually, with 10 million of these births representing unintended pregnancies.13,14 Maternal morbidity and mortality is significant among adolescent girls. Obstetric complications are historically, and continue to be,one of the leading causes of death for adolescent girls globally.15

Disparities in ASRH among girls in LMIC have not developed in a vacuum — instead these inequities are influenced and perpetuated by a multitude of sociocultural, structural, and political factors unique to each community. In some countries, sociocultural norms substantiate a stigma and/or taboo around ASRH hindering access to appropriate services and accurate information. In numerous global qualitative studies, adolescents and parents of adolescents describe a “culture of shame” around discussing and accessing SRH information. These norms lead youth to feel fearful of seeking health services in their communities.18-20 Youth describe turning to private means of acquiring SRH knowledge (e.g. the internet), which is rife with misinformation and may bring about unintentional adverse sexual and reproductive practices. 1820 Based on traditional gender roles, expectations, and family pressures, adolescent girls in certain settings are also uniquely vulnerable to preventable SRH morbidity and mortality. In one largescale review of preparedness for puberty, researchers found that adolescent girls in LMIC overwhelmingly enter puberty underinformed about menstruation, fostering a cascade of misconceptions and unhygienic practices.21 Another complication is that SRH infrastructure simply may not exist in various LMIC. Sociopolitical factors often act as barriers to the creation of youth-friendly and/or youth-derived SRH services. For example, in some settings SRH services are not offered to individuals under the age of 18, unaccompanied girls, or unwed adolescents.22

The structural and sociocultural drivers of global ASRH inequities predate COVID-19, having been embedded deeply into the very foundation of health and social structures. During times of instability, individuals at the margins of society are more likely to suffer ill consequences.23 As the COVID-19 pandemic has evolved, this historical pattern has held true with women and girls from underserved communities experiencing a higher burden of poor health, social, and economic outcomes.24,25 The COVID-19 pandemic heightens the urgency of addressing existing ASRH disparities.

Early in the pandemic, the UNFPA predicted that approximately 47 million women in LMIC would be unable to access family planning resources, resulting in over 47 million unintended pregnancies in the first six months of lockdowns.16 Models by the Guttmacher Institute note similar dire predictions: with a 10% reduction in SRH services in LMIC over a 12month period, models predict 49 million additional unmet contraceptive needs, leading to 15.4 million additional unintended pregnancies, 28,000 additional maternal deaths, and 3.3 million additional unsafe abortions.17 Though these numbers represent hypothetical estimates for all women in LMIC, adolescent girls will undoubtedly comprise a significant portion of those impacted by COVID-19 related restrictions including decreased access to SRH services, contraceptive supply chain issues, and suspension of abortion care. Though we are currently a little over one year into the pandemic, we do not have a clear understanding on the extent to which COVID-19 has impacted global ASRH, as largescale data has yet to be reported.

Immediately during the pandemic, SRH care must continue to be deemed an essential service to avoid legal complications as adolescent girls forgo lockdowns to pursue care. Partners in global health (NGOs and charitable donors) should allocate funds to supporting SRH care to sustain hospitals and clinics providing family planning, safe abortions, and pregnancy care. Funding should also be utilized to maintain the supply of contraception in LMIC that may suffer due to supply chain issues, shortages, and global diversions to wealthier regions. Additionally, funds should be put forth to support the expansion of innovative SRH care delivery methods like telehealth or other internet-based models that may connect youth to services beyond their local community.

There needs to be accountability over the long-term to ensure that, once the pandemic settles, we create a more just system moving forward. We must shift our priorities and be intentional about incorporating structural determinants into community health interventions. Programs should be developed through an intersectional lens grounded in human rights and reproductive justice based on unique community perceived needs. While working towards global equity in ASRH, we should recognize and actively work against medical voluntourism and colonial imperialism in global health work. Global communities are heterogenous in that an intervention that finds success in one community may not be suitable for another. We must engage with community stakeholders at all levels to equitably distribute power and ensure that interventions are driven by those who stand to benefit most.

Urgent action is warranted to address the predicted widening of ASRH disparities during and after the pandemic. We have been presented with an opportunity to critically reflect on the ASRH infrastructure worldwide and it must not be wasted. Global ASRH disparities have existed long before COVID-19 and will undoubtedly persist unless we choose to engage in sustained, intentional and impactful measures. If we do nothing to affect the underlying structural factors within communities, these disparities will continue to happen. It is not a simple ask to begin dismantling longstanding systemic factors, but to effect change, we must start somewhere. COVID-19 has challenged our approach to global health – how we react now will be telling for future generations.

I call on each one of us, practitioners and researchers in the field of public health, to design initiatives at the crossroads of population health, clinical medicine, and community empowerment to address social factors perpetuating ASRH disparities.

Sara E.K. Phillips is a recent graduate of the Harvard T.H. Chan School of Public Health’s Master in Public Health Program. She is a current fourth year medical student at the University of Washington. Sara is pursuing a career in OB-GYN, looking to be a reproductive and sexual health advocate for birthing people from historically marginalized communities.