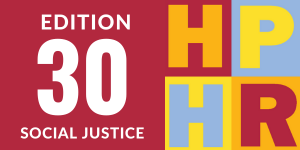 By Darwin A. Baluran, MA and Taiye Winful, MA​

The COVID-19 pandemic and its unequal impact on marginalized communities elucidate the complexity of health disparities. In this commentary, we discuss some of the key contributions that social science, particularly sociological and anthropological theory, and research, have made to our understanding of health disparities. In doing so, we highlight not only the complexity of dealing with this ongoing pandemic but the complexity of dealing with health crises set in social conditions that already make some individuals more susceptible to disease and death than others. We argue that social scientific theory is indispensable in explaining and contextualizing racial disparities in COVID – 19 outcomes. We risk perpetuating detrimental and problematic understandings of race if we neglect social scientific perspectives in contextualizing racial health disparities.

Recent research demonstrates that communities of color, in particular African Americans, Latinx, and Native Americans, disproportionately bear the brunt of morbidity and mortality from COVID-19 (Munoz-Price et al., 2020; Bassett et al., 2020) Today, much attention has focused on the high burden of chronic conditions among Black and Latinx communities to explain why they currently suffer from such poor outcomes. However, less attention has been paid to the distal social structural factors that are the root causes of such disparities. In this commentary, we argue that social science is indispensable in explaining, contextualizing, and addressing racial disparities in COVID-19 outcomes. The work of social scientists suggests that inequality and differential treatment in every aspect of social life contribute to the health disparities we see today. Below, we describe how theoretical perspectives from the social sciences help explain the racial and ethnic disparity in COVID-19 mortality more comprehensively and tie them to the broader issues of inequality in the United States. We begin by briefly discussing social scientists’ contributions to health disparities research—particularly regarding different racialized groups. Next, we make the case that their insight is indispensable in confronting the current crisis and tackling health inequality’s root causes. Lastly, we call for a way forward to address health disparities that draw on the strengths of all aspects of health research.

Although much of the early research on racial inequality in the United States was grounded on biological/genetic understandings of race, some key figures underscored the importance of social factors early on. Perhaps the most prominent was W.E.B. DuBois (1991 [1899]), whose pioneering research empirically demonstrated that social and structural factors—like color prejudice, residential segregation, lack of access to well-paying jobs, and lack of access to educational facilities—explain the divergent life outcomes between Black and white Americans. Nonetheless, it was not until the latter half of the 20th century that the study of racial disparities became a central focus for sociologists and other social scientists. Near the end of the last century, important works by Williams and Collins (1995), Link and Phelan (1995), Geronimus (1991), Braveman et al  (2011) and others offered compelling evidence for the undeniable importance of social factors in shaping the health of people (Adler 2010; Braveman et al., 2014). Yet, many social scientists have expressed renewed concern over the resurgence of biological understandings of race to explain disparities between groups (Morning, 2014; Zuberi & Bonilla-Silva, 2008; Zuberi et al., 2015). Drawing on some of the earliest scholarship on racial disparities, they highlight that racialization—the grouping of people into ordered categories within a taxonomy of races—is rooted in domination and social control (DuBois, 1920; Zuberi, 2001). Thus, to explain racial health disparities scientists must focus on mechanisms of domination (e.g., structural racism, discrimination, segregation, etc.) that produce differential health outcomes (see for example, Laster Pirtle, 2020; Morey et al., 2018; Phelan & Link, 2015; Stewart et al., 2020; Williams et al., 2019; Williams & Collins, 2016). Moreover, in line with the foregoing, Singu and colleagues (2020) have elaborated how various social determinants of health have impacted COVID-19 outcomes in the United States.

Other models, such as the biosocial approach seen in anthropological literature highlights similar patterns. Broadly, biosocial approaches have been used to understand holistic pathways that can explain observed connections with social and socioeconomic gradients. The biosocial model recognizes social and biological mechanisms’ role in social determinants of health (Dufor, 2006; Bharaian, 2016). In doing so, biosocial approaches highlight how environmental and cultural variables affect different communities. Further, this approach highlights broader aspects of societal lives by addressing how communities experience these variables and how these experiences, through stress, shape their health. For example, the weathering hypothesis attributes early onset of poor health in African Americans to the amount of early exposure to stress and consequent adverse outcomes. Because these stressful events are more likely to happen throughout the life course, they accumulate and increase the likelihood of disease onset and mortality in black individuals (Geronimus 2006). These understandings draw on larger issues of disparities in quality of life. These models present multiple theoretical perspectives that are valuable in our conceptualization of the relationship between various social conditions and COVID-19 disparities.

Racial discrimination and structural racism limit marginalized groups’ access to important resources, such as adequate housing, education, and affordable and nutritious food (Bailey et al., 2017). For example, marginalized groups typically live in or near food desserts, low-income communities with limited access to healthy food (Singu et al., 2020). Without these key nutrients, marginalized groups are left more vulnerable to disease, and in the case of COVID-19, more susceptible to more severe cases and even death (Butler and Barrientos, 2020). Today, research shows that in highly segregated cities—like Chicago—Black and Latinx neighborhoods bear a disproportionate burden of COVID-19 deaths (Kim & Bostwick 2020). These neighborhoods are characterized by high poverty rates, ‘dismantled community capacity,’ and disenfranchisement (Kim & Bostwick, 2020). However, it is important to note that these vulnerable neighborhoods’ social conditions were produced over a long period. They are the products of social, political, and economic processes that reify race and consequently shape the health of racialized communities (Sewell 2016). In line with this view, Laster Pirtle (2020) posits that racial capitalism, or the mutually constitutive nature of capital accumulation and racialized exploitation, can explain the United States’ COVID-19 inequities. Thus, COVID-19 inequalities, like other racial health gaps, are products of social, political, and economic processes that perpetuate a racial hierarchy. Through this lens, one can see why racial inequalities in health persist over time.

The Embodiment of Inequality

Other social scientists approach inequality, health determinants, and disease through the concept of embodiment, or how stress is experienced, internalized, and consequently expressed biologically (Nguyen, 2003). In doing so researchers must clarify that observed differences between racial and/or ethnic groups do not represent genetic or biological differences between people when interpreting findings (Zuberi & Bonilla-Silva, 2008). Rather, they reflect the embodiment of historical and contemporary experiences of political, economic, and social inequalities. Medical and biological anthropologists have used this process to understand the body as a political being produced by cultural and political processes (Nguyen, 2003). In recognizing concepts as inherently produced, anthropologists and other social scientists recognize health inequalities as the direct result of how biological categories are understood and reflected in society (Sharp, 2002). Framing the COVID-19 pandemic around embodiment offers public health officials nuanced solutions; as the pandemic has demonstrated, Western biomedical practices have not proven adequate to gauge or improve massive health care inequalities and health disparities.

The CDC has urged public health professionals to collect, analyze, and report data in ways that draw attention to health disparities and foster solutions-based initiatives. The social sciences offer multiple theoretical frameworks through which we can explain and address health disparities. Though these perspectives are grounded in different disciplines and hold different assumptions, they all cohere around the critical idea that race—and racial differences in health—are not biological. They tell us that racial inequalities in COVID-19 outcomes are not random, surprising, or inevitable. These inequalities are manifestations of deeply rooted and systemic inequities in American society. While everyone is at risk of contracting the virus, racial and ethnic minority groups are more likely to develop the disease than their non-Hispanic white (NHW) counterparts. At the surface level, issues of health disparities fall solely on race. In epidemiological, biological, and other biological science studies, statements that denote race as a risk factor for poor health outcomes are vast (Sheets, 2011); however, social science research consistently illustrates that racism, both institutional and personal, is a driving force of racial inequalities in health (Williams et al., 2019; Chapman & Berggren, 2005; Braveman, 2011). Thus, as we collect more data on COVID-19 disparities, such findings must be contextualized and grounded in research on the historical and social processes that produce and reproduce racial inequality in American society.

Sociological and anthropological research tells us that social, economic, political, and historical processes produce the health patterns we see today. Accordingly, a new era of social determinants of health research is emerging (Adler 2010). Among anthropologists, this involves attaching a political framework to health. Doing so directly incorporates the need for social change and equity by drawing on embodiment and resilience concepts. It also welcomes interdisciplinary collaboration that can examine and demonstrate patterns of social and structural inequalities (Nguyen, 2003). Furthermore, political frameworks of health can provide insight into cultures of inequality and their role in creating “unhealthy societies.” Studying this question aids in incorporating policy social determinants, equity, and broader awareness of the unequal distribution of power. Among sociologists, power dynamics issues have long been tied to unequal life outcomes, including health. A recent example of this is the work of Laster Pirtle (2020)— which we highlighted earlier—on racial capitalism and COVID-19. Altogether, these literatures lead us to the following two lessons.

First, data on COVID-19 racial disparities must be appropriately contextualized. By this, we mean that data interpretation needs to consider how factors like structural racism shape different people’s life trajectories in the United States, shaping their health. We risk the perpetuation of detrimental and problematic understandings of race (e.g., that race is biological and that racial disparities are inherent) if we neglect social scientific perspectives in contextualizing racial health disparities (see Reich 2018 for arguments against adopting such approaches). As others have already demonstrated, neglecting the social construction of race is not only uncritical, it is also dangerous (Graves Jr., 2003; Morning, 2014; Zuberi & Bonilla-Silva, 2014; Zuberi et al., 2015). As Ford and Airhihenbuwa (2010) noted, racialization often conditions the distribution of various health outcomes. Thusly, overlooking the various contexts that produce health inequalities risks the explaining away of these disparities as inevitable and irreparable. Further, a second lesson from the extant literature is that almost every aspect of social life influence health. Accordingly, health research requires that researchers collaborate across disciplinary boundaries. Of course, how this research approach looks varies according to the goals of the investigators (van Teijlingen et al., 2019). Moreover, others have also described good practice for interdisciplinary research (Gavens et al., 2018). The benefits of social scientific perspectives have yet to be fully harnessed and applied to address existing disparities.

Social scientists and their expertise are indispensable to the endeavor of addressing health disparities in the United States—including the gaps in COVID-19 mortality and morbidity. Their work tells us that health disparity research must shift from mere comparisons between groups to research that promotes equity through policy and shared agendas (McNulty, 2019). Doing so requires a look at the historical, political, economic, and social contexts that produce health disparities in the first place. Moreover, their work underscores the value of incorporating interdisciplinary ways of tackling health inequality to provide greater care to communities at risk. If we do not address the root causes of health inequality in this country, COVID-19 will not be the last pandemic that produces racial health disparities.

Darwin Baluran is a PhD Candidate in sociology at Vanderbilt University. His research areas include social demography; medical sociology; health and mortality; race, ethnicity, and immigration; and crime, deviance, and social control.

Taiye Winful is a Phd student in Anthropology at Vanderbilt University interested in studying the interconnectedness of biological and social factors on African Americans’ health outcomes. More specifically, she is interested in how social factors influence epigenetic changes in inflammatory related biomarkers.